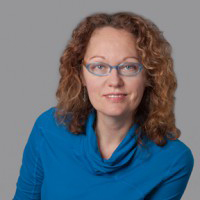 Zhenia was born in Moscow, Russia. She showed interest in dance at the age of 3 and at 4 was accepted into Bolshoi Ballet School.  That started a lifelong love affair with dance, movement and music.  When her family emigrated to NYC in 1979 she decided to become a physical therapist. She received advanced degree in physical therapy in 1990. Throughout her career Zhenia continued to advance her skills and knowledge in treatment of the human body. Over the last 23 years as a physical therapist, Zhenia owned and operated several physical therapy private practices including a pediatric home and school based agency. She received advanced training in Norwegian Medical Exercise Therapy (MET), Cervical and Temporal Mandibular disorders, became a certified prenatal and postpartum instructor as well as a Master Reiki Practitioner.

Zhenia’s treatment is always patient focused and is eclectic in its approach.  She places a large emphasis in giving patients the tools to help them work towards independence. She has strong interest in manual therapy and exercises, as well as in exploring connection between mind and body.   The ultimate goal is to empower the patient to take an active role in their recovery, prevention of injury or improvement of athletic performance. Zhenia enjoys incorporating Pilates into her physical therapy practice and is looking forward to getting certified as a Pilates Instructor.

Zhenia moved to Washington State in May of 2009, after traveling extensively through Europe and Asia with her family.  She now lives in Redmond.  When not working, she enjoys dancing Argentine Tango, skiing or putting on crampons and climbing the many beautiful mountains of Washington State.