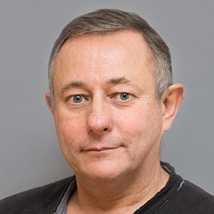 Steve grew up in London, England. He played football (soccer) through his early years at semi-pro level until injury forced him to quit playing at the age of 23. He then moved into the coaching side of the game, coaching all age groups and genders. Steve achieved the level of UEFA ‘B’ licensed coach after years coaching all aspects of the game. He also worked in construction running his own company for many years in London.

He came to the U.S. in the summers of 2002-05 coaching soccer, running camps and coaching teams. He discovered Pilates during this time and was introduced to Romana Kryzanowska by Lauren Stephen. Romana and her family encouraged Steve to go through the training program by saying ”Pilates needs more real men,” so who was he to argue!

Steve completed the program and is now an an instructor and co-director at Pilates Seattle International with Lauren Stephen. With his background in coaching, Steve is able to adapt his lessons to each individual clients needs, whilst still maintaining a good vigorous workout.